The Long Island Ducks suffered their fourth straight loss Tuesday night to the Southern Maryland Blue Crabs by a final score of 5-2. 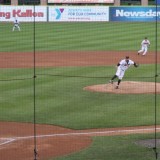 During the top of the first inning, Ducks starting pitcher Bob Zimmerman flashed some leather and robbed Blue Crabs catcher Christian Lopez of a single and some runs at a time when the Crabs had an early 1-0 lead.

Later, during the bottom half of the sixth inning, with Southern Maryland still up 1-0, Ducks shortstop Dan Lyons reached on a fielder’s choice and advanced to second base on a throwing error by Blue Crabs outfielder Casey Benjamin. With two outs in the bottom of the inning, Ducks left fielder Kraig Binick reached on an infield single by beating out a grounder to Crabs first baseman Sergio Pedroza.

In a key moment, Ducks catcher Mitch Canhan served an RBI single which tied the game at 1-1 during the home half of the sixth, scoring shortstop Dan Lyons.

During the top of the seventh inning, the action took a stunning turn, as the momentum quickly shifted to the Blue Crabs’ high-octane offense. Centerfielder Jeremy Owens hit a go-ahead two-run single to hand the Crabs a 3-1 lead. Later in the inning, to open the floodgates, Crabs third-basemen Travis Garcia laced a two-run triple to deep right centerfield which padded Southern Maryland’s lead, giving them a 5-1 advantage.

The Ducks, which scored a lackluster run in the seventh inning, lost 5-2, failing to get another big hit at the right time. With that loss, they extended their losing skid to four games. 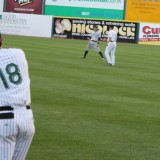 James McOwen and Shawn Williams warm up before the game at Ducks Stadium on July 24, 2012. Photo by Alexandra Henaghan

James McOwen of the Long Island Duck’s running towards first base on July 24, 2012 at Bethpage Ballpark in East Islip, New York. Photo by Alexandra Henaghan 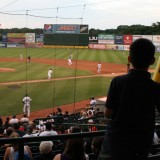 A young Long Island Ducks fan cheers on the team as they took on the Maryland Blue Crabs on Tuesday July 24, 2012 at Bethpage Ballpark. Photo by Alexandra Henaghan

Tanner Townsend of the Blue Crabs at bat at the bootom of the sixth inning on Tuesday July 24, 2012 at Bethpage Ballpark. Townsend tied the game at 1-1 with a RBI single. Photo by Alexandra Henaghan.

Jeremy Owens from the Sotuhern Maryland Blue Crabs rounds the bases at Ducks Stadium on July 24, 2012. Photo by Alecandra Henaghan