Joshua Odam: Motivated by those who told him he couldn’t

One of the things that Josh will always remember was when “Mrs. Burton threatened to fail me if I ever stopped writing,” because its such an unusual encouraging method from an English teacher.

Josh is a 6’3” senior at Baldwin High School who was born in Bedford Stuyvesant, Brooklyn. In his early childhood he moved around a lot from Brooklyn to Manhattan and eventually made his way to Long Island. He went to Catholic schools until fourth grade and then went to New York City public schools. 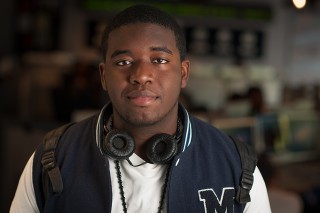 During that time he became interested in poetry and short stories. Josh began to realize his talent for writing when his English teacher, Mrs. Burton, in a New York City private school he attended, began to threaten to fail him – a clever trick she used to motivate him to aim higher because she saw his potential. She did much more than just notice his talent: she entered his work into contests such as Creative Communication who publish many children for their first time and Writers of Tomorrow sponsored by L. Ron Hubbard. “I never gave it much of a second thought until I won a few contests,” Josh said. “To me writing was just a tool I used to calm down and blow off steam.”

His teacher then even introduced Josh to the writings of Jack Kerouac and James Joyce.

Josh said he keeps motivated by those who have told him he couldn’t – and that he shouldn’t – do something. “When it comes to my goals and attaining them I feel that people are either with me or against me because not contributing to the solution you’re just adding to it.”

Josh can be found on the weekend writing poetry or at a poetry cafe.  ”I’d much rather hang out and write poetry than party.”

Josh is much more of the shy and mysterious type but does not have a problem getting in front of a crowd and speaking about what he is passionate about like the Trayvon Martin case. Josh said his two favorite things in the world are his black and white marbles notebook and his treasured black Egyptian necklace because it symbolizes where your ancestors came from. Josh said he is inspired to express himself with out a fear or doubt because of people such as Rudolph Valentino, Jackson Pollock and Keith Haring, all of whom Josh says “spat in the face of conformity and made an everlasting mark on the world by doing so.”

Josh submitted his first news article for a school paper in 10th grade which was about two of his friends who had recently moved to his town of Baldwin from Haiti after the devastating earthquake of 2010. He was thrilled seeing his name on the school newspaper. Josh is planning on double majoring inPre-Law and Political Science at Baruch College because of the good law and political science programs.” Although journalism is not his main career goal the journalism background goes hand in hand with law.

One of his most defining moments was when I saw how elated my mother became when I showed her that my article made the front page!”

“All the things I do are to make my mom happy,” Josh said.