By Matthew Maron
Hebrew Academy of the Five Towns & Rockaway

At a young age, Margaret Neal was reading and writing stories and poems, an interest that turned into a passion that she took with her to Lynbrook High School where she is acting op-ed editor of Horizon. 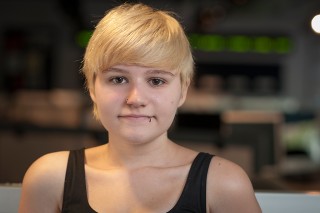 Subjects of her pieces range from women’s rights to space travel, and she is still eager to expand her journalistic horizons by attending the Robert W. Greene Summer Institute for High School Journalists.

“I wanted to strengthen my writing and also offer more to my school newspaper,” she said of her interest in the weeklong journalism bootcamp at Stony Brook University.

Besides working for her school newspaper, Margaret, 17, is also a member of her school’s literary magazine. In addition to contributing some poems, she also helped design the layout of this year’s magazine and will be editor-in-chief this coming fall.

Margaret is also a member of her school’s environmental club, which discusses environmental problems facing the local community and the nation and tries to help reduce the “carbon footprint,” the negative impact that humans can have on the environment.

One of the club’s proudest accomplishments was being awarded a certificate of merit in the Best Recycling Event category of the 2011-2012 Green Challenge. The challenge, sponsored by New York State, recognizes schools that work towards responsible waste management. Margaret was upset with the amount of recyclable material that was being thrown in the trash when it could have been used for better purposes.

Margaret took action and together with her friends decreased the amount of garbage output by 29 percent and increased recycling input by 80 percent. The club has also held bottle cap and printer cartridge recycling programs and well as beach cleanup programs, a majority of which Margaret is in charge of. Margaret is very proud of what she and her friends have done and hope to continue it this coming year.

Margaret is very excited about joining The Greene Team. The program was created in honor of Robert W. Greene, a Pulitzer prize- winning investigative reporter who, even as his health waned, wanted to create a place for High School students to get a true sense of professional journalism.

She looks forward to diversifying her style of writing and is excited to learn from the skills of her peers and instructors. Together with these other high school journalists, she will learn how to take professional photos, use professional editing software such as Final Cut Pro and even conduct a television broadcast.

When asked what she thought of all the things she will learn, Margaret responded, “I simply can’t wait.”