Rachel Siford: Lover of both achievement and mayhem

Rachel Siford is a high achiever who is drawn to the dark side. She likes her As and her novels about sex, drugs and mayhem. 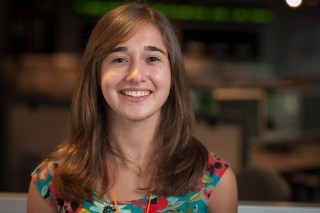 On the lighter side, this rising senior at Hauppauge High School is very passionate about school, swimming and journalism. It’s in books that she seeks out the grittier side of life.

Rachel remembers wanting to be an author as early as first grade, and took an interest in journalism in high school.  She joined her school newspaper, The Soaring Eagle, and became the Opinions Editor.

Over the past year, she took a journalism class, with her favorite teacher ever,  Dawn Lynch. Lynch’s helpfulness — especially with grammar — and writing have all helped and inspired Rachel. “I really look up to her in a writing way,” she said. “She’ll critique my work and I’ll go ‘wow, that’s a really good idea.’ And I can talk to her about personal stuff, and she’ll give me advice, and she’s just the best person ever. You should meet her!”

One of Rachel’s biggest journalistic accomplishments was an article headlined, “Where is the Christmas Spirit?” questioning the materialism of the holiday season. “It was something that I’d been noticing; everyone talks about what gifts they’re going to get each other and no one talks about Christmas, the holiday.” The article, which started out as an opinion piece and got moved to features, gave her a chance to express her feelings on the issue.

Next year, she will be editor-in-chief of the Soaring Eagle. Her mother says she is very proud of her daughter. However, Rachel’s motivation comes from herself: “It’s not for my parents,” she says. “I like to do well.”

Aside from the newspaper, Rachel loves swimming, which she has been involved with since her childhood. She started taking lessons when she was three-years-old and joined a team when she was seven. She works with a program called Adaptive Aquatics, which teaches children with special needs how to swim.

Once in the program, she was teaching a girl named Stephanie, who had Down Syndrome, how to swim.  When Stephanie finally succeeded, Rachel told her that she was proud of her and Stephanie hugged her. “My heart just melted!” Rachel said “I could tell she saw how proud I was of her, and she was so proud of herself.”

Rachel, despite her good behavior, loves books about dark topics- the grittier the better.

What’s the appeal of such books? Rachel said they show her a side of life that she doesn’t experience: a world of drugs, sex and rebellion. When discussing “Crank,” by her favorite author, Ellen Hopkins, she said, “It had pot, meth, rape, everything!” and laughed. Rachel would like to report on these issues in the future, and perhaps write novels about them. She thinks this would be a way to expose the darkness in the world and make a difference.

Rachel has many plans for her future. Next year, she’s taking an English class called Myth and Magic. She plans on going to Stony Brook to study journalism, joining the Peace Corps and then becoming a journalist in Manhattan.