At age three, Sarah Schreiner slid the Spice Girls’ movie into her VHS machine and jumped onto her couch, loudly singing along.

Not much has changed since then. 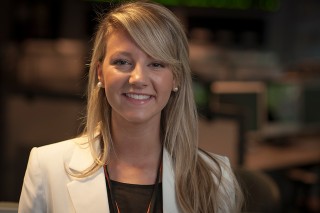 She captured the entire Greene Team’s attention during meals with her entertaining personal stories. Although she slept the least, Sarah was by far the most energetic person in the group this week.

The rising senior has always loved to display her creativity through crafts such as scrapbooking and painting. “She gives everything a creative twist,” Mrs. Schreiner said. As a graphic and interior designer, her mother is credited with being responsible for this.

“Sarah is bright and tends to grasp things quickly,” said Bill Schreiner, Sarah’s father. ”She has a very dynamic personality and is very open-minded.”

“My mom always has said that she can drop me off in Idaho with ten dollars and I could find myself somewhere to sleep, a meal that night, and a way home,” Sarah said with a laugh.

Not surprisingly, meeting new people is one of her favorite aspects of journalism. She aspires to be a talk show host in the future. “It would allow me to be who I am but also do what I love,” said Sarah.

Sarah didn’t always dream of becoming a journalist. Growing up in the town of Great River and attending East Islip schools, Sarah’s preferred subjects were math and science. Soccer was her main passion. However, after her grades suffered due to the rigorous practices and weekend games along the East coast, Sarah decided to quit the competitive sport.

“I had to remake all the friends I had already made, which was tough,” said Sarah. “I basically had to restart my social life.”

After quitting soccer, Sarah stumbled across her love for writing. She attended meetings for her school’s literary magazine, where she displayed her talent through writing poetry and prose. Her work caught the eye of her teacher, Mrs. Dlouhy.  She encouraged Sarah to write for The Broadcaster, the school newspaper.

Sarah took East Islip’s journalism course during her junior year of high school and was soon appointed Centerfold Editor, which was when she realized that journalism was for her. “It has stuck with me because I feel that my skill set applies to this career the best,” she said.

Sarah thoroughly enjoys voicing her own opinion and considers herself a commentary writer. Her main passion is writing about controversy. For example, her article titled “Should the Government Control Our Diets?” questions if overweight people increase the cost of health care.

Sarah’s diligent late grandfather, whom she called Papa Bill, serves as the inspiration for her optimism, hard work, and sincere dedication to journalism. “I was very close with him. He was like my best pal,” she said. He maintained his upbeat attitude even after his wife died, which taught Sarah to always think positively. Sarah’s boldness and assertiveness comes from Papa Bill’s refusal to let anyone take advantage of him.

“Her strength is how easily she can strike up a conversation with anybody,” said Jackie Schreiner, Sarah’s mother and mirror image. “Journalism is the perfect career for her.”