William Stieglitz: Using his imagination to the fullest

William Stieglitz composes plays, pens poems and writes stories, too – all examples of his deep interest in creative writing and journalism.

“There is so much you can do with your imagination,” William said while holding a notebook of his stories. 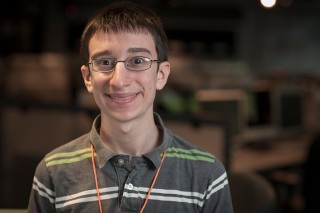 William participated in an all-day play-writing session called “8 Plays in a Day,” where he wrote a play about two women arguing over parenting styles at a restaurant while the waiter was trying to break up the fight so he could take their order.

William takes what he learns from his favorite classes, especially chemistry, and applies it to his writing.  He wrote a piece on particles’ motion and used that to symbolize how nobody can ever be completely evil because there will always be good to influence them. It’s a lot like how absolute zero can never be reached by particles because there are always factors influencing them, like motion.

William was on his middle school newspaper, The Osprey, for three years and his high school newspaper, The Kaleidoscope, for one year where he writes about art related events that take place in his school. He is excited to be a part of the Greene Team this summer, but is also nervous. He looks forward to learning about the different types of journalism.

“He makes art fun and made creating things exciting,” William said. “I took those ideas and used them in my creative writing and journalism because they are also art.”

In William’s spare time he enjoys video games and reading.  The Adventures of Huckleberry Finn by Mark Twain and The Outsiders by S.E. Hinton are some of his favorite reads.

“William has a creative mind and is very enthusiastic,” said his brother Josh.

William often struggles because it is hard for him to keep up with work because he works at a slow pace.  He tries to overcome this by focusing extremely hard on his work while analyzing and thinking about what he is doing.

In the future, William hopes to be a published author with his own house and a family along with it. He wants to write fiction and adventure novels because it allows his creative mind to run wild. When asked what he thinks his best quality is, he responded “being considerate and a good person.” Wiliam added “that is the best quality you can find in anyone.”

One Response to William Stieglitz: Using his imagination to the fullest