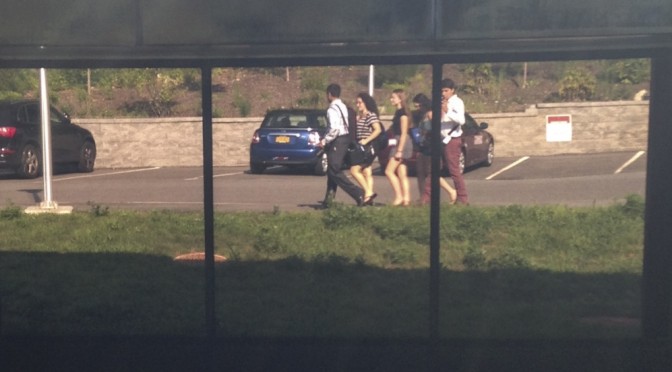 Day two continued with a final photography lesson with John Williams. Farewells were a tad sad, but we learned a lot in two days and it was great. I think the highlight of the day was being in the newsroom learning about broadcast and just as Professor Ricioppo finished his lesson Professor Ahmad rushed in and told us that we had to go cover our first story. In seven minutes he gave us background on what we were about to cover: a new emergency operations center is being built in the University Police center and we get to break the news. (By we, I mean the team of Kelly, Courtney and Jaqueline). Then Prof. Ahmad mentioned that we missed the bus and we had to walk a solid 27 minutes, which helped us prepare but the sun was scorching and halfway through I felt like a nomad with false hope of a destination. We made it in time and reporting was really fun.

After 2 hours of reporting, we missed another bus! Our timing was on point. As We started our journey back to the newsroom Professor Ahmad started sharing his career and different experiences he’s had.

Noting the disappointment of having to walk with the equipment, he offered Starbucks on him and we grew a bit joyous only to find a closed a Starbucks. I found the situations quite comical and thankfully we made it to the newsroom soon after with the relief that we were just in time for dinner.