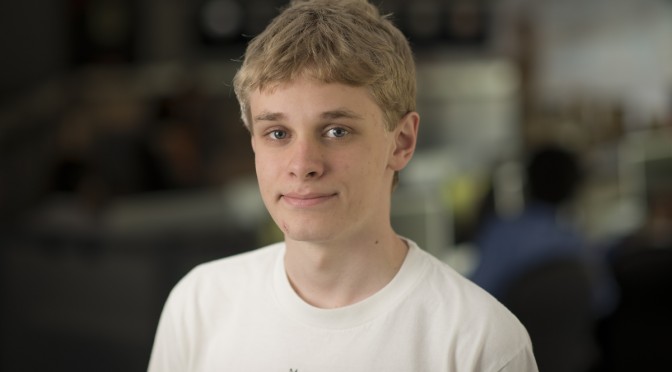 Award-winning journalist Daniel Walocha has been acknowledged for outstanding work on his school newspaper, Horizon.

Known as Dan to his friends, he made his journalistic debut in ninth grade, writing for Lynbrook High School’s newspaper about his school’s band competing at Hofstra University. Dan said the band teacher liked what he wrote and appreciated the coverage.

“I follow the rule of the inverted pyramid to make sure it’s concise and full of details,” Dan said about a style of writing in which the lead has the most important information.

Dan’s high-flying achievements in journalism have earned him second place for Best Feature Article at the Adelphi Press Day and third place for Best School Feature. One article featured a school janitor and the other focused on the history of Class Night, a major event at Dan’s school.

Journalism, though, is not the route that Dan desires to take in the future. He said he has no plans to major in English or journalism. “I like writing and reading as pastimes,” Dan said. “I’m not such a huge English person, but I appreciate the subject.”

So why does Dan, also a member of Driftstone, the school poetry club, like writing so much?

Dan said it helps him express himself as well as voice his beliefs. He also said writing is a great way to construct one’s thoughts and transfer them onto paper. An individualistic thinker, Dan said he has strong opinions on almost any topic, making him unique: He takes one side and sticks to it.

“Dan has taught me how you have to stand up for your opinion,” said friend Samantha Laskin. “If there are complainers, let them complain. They can’t do anything to you.”

An aspiring surgeon, Dan said he has volunteered at Winthrop Hospital in the neurology center every Saturday since November. Influenced by his older sister, currently studying medicine at Poland’s Poznan University, he plans to major in science and go into medicine.

“We’re both very science based,” Dan said, “but I also just want to help people and save lives.”

Dan comes across as an intelligent young man with great aspirations. He also has interests outside of school, saying he enjoys seeing movies with friends, swimming, and running.

Dan’s other friends also speak highly of him and admire his work ethic, quirkiness, humor, kindness and trustworthiness.

“I would describe Dan as a very smart, levelheaded guy who I could strongly rely on for anything,” said Evelyn Sokolowski, Dan’s best friend since childhood. “He always has the best judgment, especially when I need his advice, and I could really rely on him for anything.”

Throughout his July week at the Robert W. Greene Summer Institute for High School Journalists at Stony Brook University, Dan said he would like to gain broadcasting skills, learning about producing video footage and its processes. Dan said he hopes to have a positive experience there by engaging in journalistic lessons that will help him create outstanding final products.