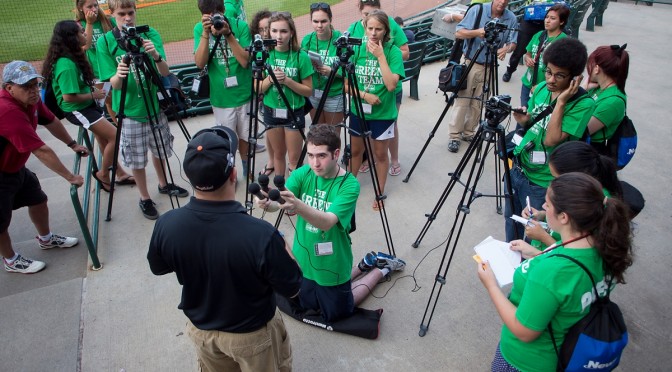 My team and I had so much fun getting B-roll and interviewing fans at the Long Island Ducks game about the rivalry between the two teams. Most people didn’t even know who the other team was (The Bridgeport Bluefish). We found it hysterical, and perfect for a story in itself. Is there a rivalry that no one even knows about?

Before the interviewing, we went to a press conference with Michael Polak, Media Relations & Broadcasting Manager for the Ducks. That was stressful and chaotic because everyone was trying to go in different directions and the camera people wanted the best spot, but so did the interviewers. Poor Colin had to hold everyone’s microphone on the ground while Polak explained his position and answered questions about the game.

Our team had a story about the “other” fans, the Bridgeport Bluefish fans from Connecticut. We asked anyone with a blue shirt to a blue hat if they were rooting for the other team, and sadly, most people said no. Some people didn’t even know who the Bluefish were.

We made our story about the rivalry between the Bluefish and the Ducks and asked Duck fans about the other team, which got them riled up and made for a good news story. We got B-roll and people dancing and having a good time supporting their favorite Long Island team. As we were walking around I noticed people were not paying attention to the game itself. I think I heard more kids screaming and cheering, which just explains the way the atmosphere at the Ducks game is. It was a great night filled with missing camera bags, duckbills, and bad, spicy and expensive chicken tenders.