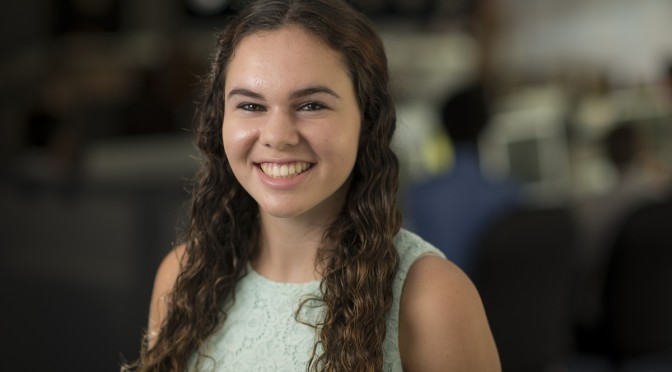 Jacqueline Napolitano, a Commack High School junior, has her eyes set to be in front of the camera. When she was as young as 12 years old, Jacqueline was inspired to report: Her idol was none other than former NBC “Today Show” host Katie Couric.

She wants to broadcast news, not just write it.

“I hope to work for something like The ‘Today Show’ or even ‘E! News’” Jacqueline said, speaking of her future.

In her sophomore year in high school, Jacqueline took a TV studio class and saw just what it was to be a broadcast journalist along with expanding her horizons, both socially and creatively.

“I took it in 10th grade, and that’s when I found out I could be myself and I found other people who were just like me,” she said. Jacqueline said that, although she had already found her clique of best friends, she would have never made many of the good friends she has now without that class.

In her junior year, Jacqueline rejoined her school’s newspaper, The Courant. She used the newspaper office along with the TV studio as a place to escape the everyday problems of high school.

It became apparent to Jacqueline that being in the newspaper office or in the studio was where she could really express herself. “It was a way to expose who I was”, she stated, “When I was on camera especially, I could be goofy and serious while reporting.” Not only did she show her charm on camera, Jacqueline was able to show her personality on the page as well.

After a brief hiatus, she returned to the school newspaper as a staff editor with high hopes of becoming editor in chief. She credits Christina Semple for her talent as a journalist.

“She taught me everything I needed to know in such a short time” Jacqueline said.

When it comes to college, Jacqueline has her sights set on Syracuse and just about any other major journalism school. She expects to change her minor countless times, but states that broadcast journalism will be her major throughout college.

In the near future she expects to learn a lot from the Robert W. Greene Summer Institute for High School Journalists, not just from advisors but the other attendees as well, and she hopes to get a taste of college life.

The “Today Show” had put broadcast journalism in Jacqueline’s mind, and it hasn’t left since. Her parents supported her in this and have encouraged her every step of the way from then to now.

“They are extremely supportive in whatever I do,” said Jacqueline. According to the future journalist, Jacqueline’s parents always raised her to believe she could accomplish everything she set her mind to.

This passion was accompanied by great personality and optimism.

“Jacqueline has the potential to be a great journalist because she is outgoing and she can get along with everyone,” said Melissa Minerva, Jacqueline’s friend of 10 years. “The greatest quality about Jacqueline is her personality.”

When she reached middle school, Jacqueline found herself chasing her dreams as part of her school newspaper. Although she had always been fascinated by reporting, Jacqueline states that it was a good step towards the real deal. Although she excelled as a journalist, Jacqueline says she feels that she belongs in front of the camera, broadcasting the news.