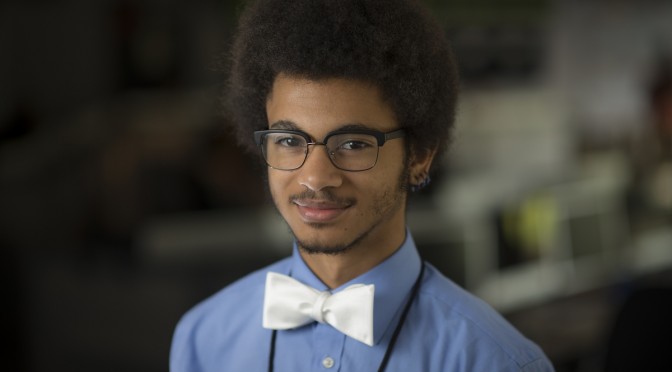 Seventeen-year-old Jason Reid likes to stand out in the crowd— wearing a bow tie every day and portraying a sense of individualism in his writing.

Jason’s freshman English teacher sparked an interest in Jason for journalism. The class did a project in which they had to interview their peers, which Jason found very fascinating.

“I found interviewing people and recording who they are and bringing them to life on paper was something I could do,” Jason said.

Being the editor of his school newspaper, The Golden Wave, has had many high points, Jason said, especially for his writing career so far. In a recent article, he wrote about voters passing his school budget, a year after it was cut. He felt that the article opened a lot of eyes to the administration of his school. It made him feel his writing mattered.

“The effects that my writing had on people made it seem like I had a great impact,” Jason said.

Many journalists have a role model in the business, someone they want to emulate or someone that inspired them to become a journalist. For Jason, it is Anderson Cooper. In 2010, Jason was on CNN with Anderson Cooper when he talked about being bullied in the past.

“Seeing what he did and watching his other shows, how he goes to other places and shows what is really happening made me want to do the same,” Jason said.

Jason has a mindset of being who you are and not caring about what other people think; he doesn’t feel the need to fit in if he is not being himself.

His mother, Michele Reid, said it takes a while for her son to get comfortable – but that he eventually opens up.

“Once he is pulled out of his shell he is funny and witty,” she said. “Jason is very artistic and has a thirst for knowledge.”

Jason’s past of being mistreated physically and emotionally by other students is the main reason he chose to get into journalism.  After his experience with Anderson Cooper and that of other students who were being picked on constantly in school, Jason wanted to be the person that found the good in the bad things.

After the CNN experience, he knew journalism was something he wanted to do.

“[Journalism] has not only let me stand out as a person. It has allowed me to take in sharing topics that might otherwise go unnoticed,” said Jason.

As Jason develops a new chapter in his life of being unique and his own person, he embarks on the Robert W. Greene Summer Institute for High School Journalists and hopes for it to be a learning experience. He hopes to be taught a new writing technique and expand his horizons on how to put pen to paper, while also being excited about about having new experiences.

Jason hopes one day to work for Newsday. But, as far as college goes, Jason wants to study at SUNY Plattsburgh and dual major in journalism and communications. He strives to be the editor of the newspaper on campus and one day hopes to become a political journalist.

“Journalism has become endangered and I want to be part of the wave of reporters that bring it back,” Jason said.