I’m tired but up and quacking out after covering last night’s LI Ducks game. Covering an event is much different than attending an event. I always wondered about that when I saw a press team or photographers at a sporting event or concert. The game was fun in a really different way because you have a completely different perspective while working rather than attending; every time I was in foul territory and wandered off trying to snap a good picture, I felt a fear of getting hit by a ball.

Early into the reporting, I snapped a shot of a grown man with a “quacker” in his mouth, getting the crowd excited. Then he ran off chasing somebody that I’m assuming he recognized. Towards the end of the night, I remembered that when somebody is clearly identifiable in a picture you need his or her identity and I panicked; my eyes started racing through the general area where I caught the picture and I couldn’t find him. Then I noticed a man setting up a group of people for a picture and when I turned around I found the man taking a picture! Thus I got his name and where he is from. It was a a quacktastic evening from pictures to interviews to getting dirty looks from a couple die-hard Duck fans as I searched for a Bridgeport Blue Fish fans in what clearly appeared to be a home cozier than a pond for these Ducks.

Before the field trip, I must include that Newsday’s own Bob Herzog talked to us about his career covering sports and also about sports journalism, which in a way I think of it as a basis because everything else you that one can cover is sort of his or her “sport” and there are specific aspects that primarily pertain to sports reporting, but if you change the subject those techniques can help other types of reporting. After Bob’s lesson, Connie Conway gave a quick lesson that followed with a lot of hands on about television news.

Before the game, we visited Newsday and got to see how vast it is. Bob came along with us to Newsday (and the Ducks game), inside Newsday there were some writers and editors working quietly, but they were also welcoming. We also got to partially see the printing press at Newsday and learn about the paper’s history. Honestly, I didn’t know how large of a paper Newsday is, which made the experience so much cooler getting to know about its growth. All in all, the day was a fastball with a drop of knowledge that fit just right. 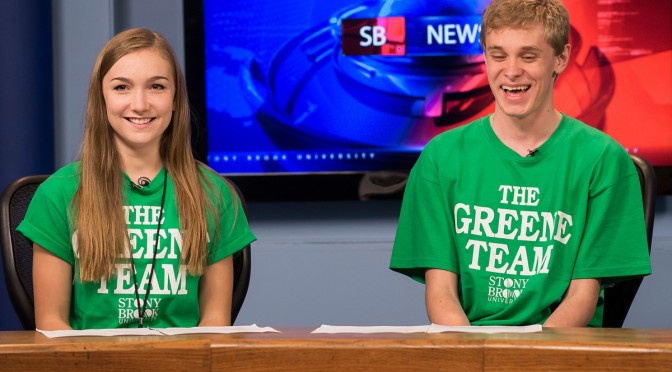 I can’t believe the week is already half over. Yesterday was jam-packed with ducks, cameras and good advice. The first thing we got to do was practice filming in front of a real broadcast studio. We each got our turn to play the anchor, the cameraman, floor manager, and more. Being on-camera wasn’t too much pressure, but I actually liked being at the teleprompter the most. It was really cool to see how broadcasting really works, and I loved seeing everyone laugh and have fun on camera.

Next, we visited Newsday to see the facility and talk to some journalists employed there. I was surprised at how huge the newsroom actually was. Everyone from sports writers to entertainment writers were hard at work. We even got some free t-shirts for our travels.

After visiting the newsroom, we sat down to hear some guest speakers. We listened to four or five journalists who spoke about their experiences, and how we could become better journalists. Each and every story was so inspiring and everyone seemed to genuinely love their jobs.

Following our Newsday tour, we drove straight to the Long Island Ducks game. I had never been to a Ducks game before, so I didn’t realize the amount of people that would come to support the team. Families, little league teams, couples, and loyal fans were just some of the enthusiastic fans that sat in the seats of the Bethpage Ballpark.

We got to work right away, beginning with a quick press conference with Ducks Media Relations & Broadcasting Manager Mike Polak. Everyone in the stands looked at us as we wore our green “Greene” shirts labeled “PRESS” on the back. I think the Newsday backpacks gave people a false impression that we worked for Newsday, but that was just fine to me. Once the game started, we got right to interviewing.

We interviewed about five or six fans on the rivalry between the teams, the Bridgeport Bluefish and the Ducks. It was fun filming B-roll, or background shots/action, because we got to watch all the diverse and interesting fans. The only downside was since I volunteered to film that day, I had to carry the camera, camera bag, and tripod everywhere we went.

Once we were finally finished interviewing, we left the game a little early. On the 45 minute bus ride home, we relaxed and listened to Bob Herzog talk about life as a sports writer.

After we got off the bus, we spent some time in the dorm’s recreation room, and played ping pong and pool with some of the students from the math program. Yaya and I walked up to our room like zombies, and crawled into bed to relieve ourselves of exhaustion. We woke up today again, at 6:30 a.m., and now we are blogging, at 8:37, at it again.