The second day of the Greene Institute was much more eventful than the first. We started the day with an extremely early breakfast, utilizing the Student Activities Center for the first time, and then made our way to the newsroom for our first official lesson, which was probably the longest lesson I’ve ever attended. We then had the fortune of interviewing Shawn Heilbron, Stony Brook’s new Athletic Director, which was exciting and very informative.

Our photography lesson was taught by John Conrad Williams, who was kind and a great teacher. He informed us of the different settings in the cameras, and I was almost overwhelmed by all of the information I received in such a short amount of time. He then took us outside to practice shooting still pictures, profiles, and a technique called “panning.” I’ve always loved photography and especially the idea of it. Overall, it was an amazing experience and I had a great time.

After dinner, we went to our video lesson where we learned basic shooting skills and techniques. We also went outside for this, which was definitely a nice break from indoors. Separating in groups, we walked around campus and shot various videos of people walking from different angles.

After a long day, you’d think we would want to sleep. Well, you’d be right, because we were incredibly tired, but somehow our desire to spend even more time with each other overruled our fatigue. My roommate, Lisa Angell, and I went to Kayla Aponte and Sharon Ahmed’s room to play what is now becoming our nightly game of Scattergories. As we were getting ready to play, however, we decided that we would like to add others to play with us. Soon, almost all of the girls were piled into the little room, and the competition began. I became even closer with those girls, and as it has only been a couple of days I wonder exactly how close we’ll be by the end of the week.

We hit the ground running on the first official day, instantly immersing ourselves in photography and film. While learning from Newsday Photo Editor and Pulitzer Prize winner John Williams was a unique and once-in-a-lifetime experience, I highly doubt my blurry shots will be winning the prize next.

My previous experience in photography – the renowned selfie and occasional picture of my little sister doing something cute – were definitely lacking when compared to the technique and set-up needed to take the perfect “action shot.”


Another new experience yesterday was the press conference with Stony Brook’s new athletic director, Shawn Heilbron. It was seriously cool – I felt like a real-deal journalist covering a beat with my notepad and voice recorder. Heilbron seemed like an ambitious professional.

The last class of the evening was about filming to “capture the moment” – the final segment of Prof. Ricioppo’s mantra. While it’s hard to pick a highlight in such a packed day, running around with a camera and tripod and taking ten-second clips of happenings on campus was definitely up there. It really was great – taking shots of fountains and wandering students at dusk, climbing and crouching to get the perfect angle, and holding back laughter while someone else in the group was filming was the perfect way to end the day.


While I was exhausted (and starving – in what world is 5 p.m. dinnertime???) on the walk back to the dorms, the fun wasn’t over yet. After a quick call from home (and some disdain from my mother as I ate M&M’s at 9:30), my roommate Mary Kate and I heard a knock at the door – the Greene Team girls were assembling in a dorm for Scattergories and snacks. Of course, I was beyond sold on that idea (has there ever been an invention more brilliant than triple-stuffed golden Oreos?). We crowded into the room, sitting in a circle around a slew of snacks and game cards (huge thank you to Kayla’s mom) and joined the game. It was a great time, and a really neat game.

My roommate Mary Kate and I played as a team, scrambling to think of unique boys’ names and celebrities in accordance to the letter chosen for the round (in a stroke of brilliance, she used “Nancy Regan” for celebrities whose names started with “N,” and I got a point for “Octavius” in the category of boys’ names that started with “O.”).

Today looks like another full day, especially now that our teams have been selected and our stories will be pursued in the afternoon.

Fingers crossed for a good one! 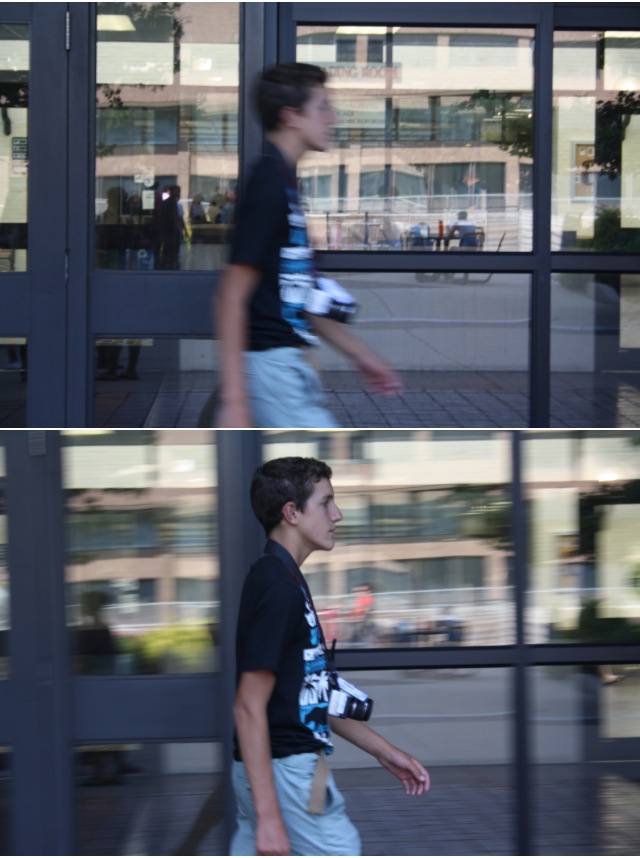 Yesterday was full of photography, cartwheels, and Double Stuf Oreos. We started the day by blogging and interviewing the new Athletics Director here at Stony Brook, Shawn Heilbron. I’ve never interviewed a subject among eighteen others, so that was really interesting. Heilbron was very well spoken and enjoyable to listen to. He gave us exactly what we needed to write our article.

After lunch, we got the privilege to learn from a Pulitzer Prize-winning photographer, John Conrad Williams. After seeing what an incredible photographer he was, I was a bit intimidated. But after Williams showed us some basic skills of photography, I became more confident. We ventured out of the ice-cold newsroom, and out to take photos of the fountain, and then on to portraits. After experimenting with the camera’s ISO, shutter speed and aperture, we moved on to action shots. We jumped, cartwheeled, and leaped across the grass, while our partner tried their best to capture the shot. One of my shots came out really cool, so I inserted it into this blog post.

Following our photography lesson, we ate dinner. I decided to make instant mac & cheese in the cafeteria’s microwave. Solid choice. Once everyone had finished eating, we began our broadcast lesson. Rick Ricioppo was our instructor, and he helped us assemble the camera on the tripod, and get the most out of our videos. Towards the end of the lesson we got the chance to test out our new skills and tape some scenes outside. We filmed everything from footsteps to still nature. I’m excited to see how our (very random) movie comes out.

After a very long day, we situated into the dorms. All the girls gathered in one room to play a fun game called Scattergories. We laughed at every single response while shoveling down Double Stuf Oreos and Doritos. Party games and junk food is always a good time. After a few rounds of playing, my roommate Yaya and I went back to our room. I’m so glad Yaya is my roommate because we are so much alike. We will definitely keep in touch after this program ends. Let’s just say there’s never a dull moment in room C211.

Day 1 of the Summer Institute, being thrown into a group of teens and abandoned by your parents doesn’t sound like the start to a good week. At first you think, “Oh god, what on earth did I get myself into?”

A brief look at the people in the room terrified me, “These are friends you’ll have for years to come” said the Greene Summer Institute alumni. Honestly, it didn’t seem promising. Being the constantly hungry teens that we are, the thought to buy pizza sparked conversation between the whole group and eventually we were all chatting and getting along. Who knew cheap, greasy food can bring people so close together?

The first night was better than expected, within a mere 5 hours I had established a group of girls to hang out with in our room. Sharon Ahmed, my awesome roommate, Hanna Da’Mes, and her roommate, Lisa Angell, who is actually my former astronomy teacher’s daughter! Normally, I’m awful at making friends, but somehow we all hit it off! Immediately we all exchanged Twitter handles and creeped through each others’ accounts (the typical girl thing to do). Lisa and I gave the world’s worst description to Sharon and Hanna on how to play Scattergories and they agreed to play. Our answers were hilarious and after a few rounds we were practically screaming everything at each other and laughing obnoxiously loud. It felt good being with a group of girls who all acted the same.

And then it happened. The time came to face the moment we all dreaded, showering in a public bathroom. Shockingly, not as bad as I thought. Anything gross is easy to face when you know everyone else has to do it too. It seems like within just this one day I’ve done everything with these girls. I was even “peer pressured” into making an Instagram account. This week is off to a good start if you ignore the god awful wake up call at 6:30 a.m.  I am most definitely looking forward to a great week with these lovely ladies.

Day 1 (Sunday): Arriving at Stony Brook, anxious and excited for the week that lies ahead, I move into my room and exchange goodbyes with my parents and sister. I am left alone in an unfamiliar place with very unfamiliar people. One would think it would take at least a full 24 hours to make friends. But no, it took a slice of pizza and a game of Scattergories.

So meet the Scattergories crew: my roommate Hanna Da’Mes, who I had only briefly texted before the program, Kayla Aponte, one of my dad’s former students from Longwood, and her roommate Sharon Ahmed. Soon we were joking around like old friends. I never thought it would be such an easy adjustment being put in a place with complete strangers. Soon enough I was being my goofy self with people who turned out to be quite similar to myself. I never thought four girls could hit it off so fast and so well. We stayed up later than we would like to admit and mingled with some of our fellow journalists.

Day 2 (Monday): Due to the time we all went to bed, the 7 a.m. wake up call wasn’t anyone’s cup of tea. I am not a morning person, so waking up in an uncomfortable bed at the crack of dawn (by my definition) was practically torture. Early morning breakfast with the New York Times was definitely a first. I am looking forward to getting our group assignments tonight along with hopefully another game of late night Scattergories. The week is off to an enjoyable start with some pretty fantastic people.