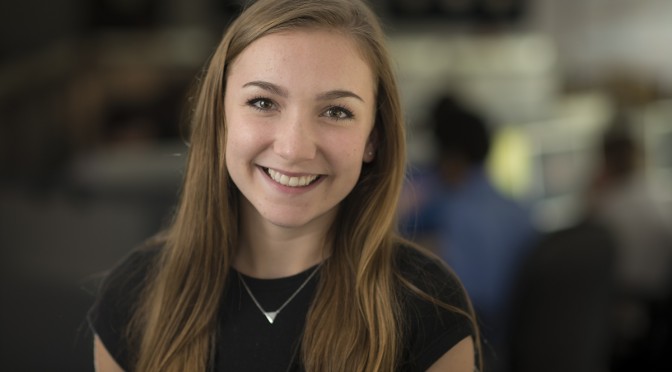 For Kelly Colligan, growing up on Shelter Island means even a trip to the mall requires a long trip including a ferry.

But Kelly is far from sheltered. She keeps busy watching movies, being active in her school, Shelter Island High School, and working at a souvenir shop.

“Playing sports, doing journalism and making excursions to other places on Long Island helps me to experience the world around me,” Kelly said. “I’m hoping once I graduate high school to college some place outside of Long Island and experience other societies and cultures.”

Kelly, 15, was one of nineteen students selected to participate in the Robert W. Greene Summer Institute for High School Journalists this July.

Kelly’s interest in journalism arose two years ago during her freshman year of high school when her English teacher influenced her to join the class. She learned quickly and was soon promoted from staff writer to editor as a sophomore. Kelly said one of the main reasons she stuck with journalism was, the “realness” of it all.

“Writing articles, knowing that they may have an impact on society, is really cool,” Kelly said. “Journalism gives young people a voice that they are not given enough.”

When she is not in class writing stories and helping design the layout for “The Inlet,” her school’s newspaper, Kelly is an active teen. She plays multiple sports, including volleyball, basketball, soccer and softball.

“I really enjoy playing volleyball,” Kelly said. “I play on my school’s varsity team, and I play on a club team during the off-season.”

Her artistic side not only shines through her written work but also when she is acting on stage.

“ I have participated in school drama club since seventh grade, and I really enjoy that as well. This sounds corny, but I really enjoy making people laugh. I think that’s just the best feeling.”

Kelly said journalism has changed the way she approaches her writing.

“Journalism has improved my writing skills tremendously,” Kelly said. “It’s also taught me that print is risky, but sometimes as a writer, you have to take risks to become successful.”

As a staff writer during sophomore year, Kelly covered a wide range of topics. “I love trying new things,” she said.“. . . Seeing everything come together is exciting.”

Now as an editor, Kelly said she enjoys helping new writers develop their stories and putting the final touches on all the articles.

“I like getting a bunch of raw material and making it better,” Kelly said. “Seeing everything come together in the end makes me feel like I accomplished something worthwhile.”

For these reasons, she said, she hopes to continue studying journalism.

“Journalism is something I will somehow always take part in throughout my entire life,”Kelly said. “I feel privileged to be part of the selective Greene team.”