As the week nears a close, work on The Greene Gazette has been chugging right along. Yesterday was devoted to newsroom work: calling sources, working on videos and writing, writing, writing.

I had the opportunity to go into the sound booth and record the tracks that will play over our broadcast piece on new campus cop cars. Being in there was both super cool and super weird—does anyone’s recorded voice actually sound that way in real life? I’m concerned.

(Funny enough, my family tried to FaceTime while I was in the booth and got a quick tour of the sound system and downstairs newsroom before I had to get back to work. So really, the day was filled with writing and a quick update on why my parents should not have bought a huge sound system for my brother.)

I also had the opportunity to get the profile I’d written on Reid, edited by Newsday copy editor Goodwin Anim. The experience was so valuable, since he really broke down what I did right in addition to what needed to be fixed.

It was a serious and authentic newsroom today—the clacking of keys sounding throughout.

I actually managed to finish my written assignments relatively early in the evening and was able to leave the newsroom to get “man on the street” interviews with the help of Frank Posillico, an online photo editor for the New York Daily News.

That trip was definitely the highlight of the day. I got to explore the campus a bit and hear more about the field from Frank. That late in the evening, most students weren’t milling around the library and lounge, but we were able to get two pretty good interviews (though most people we asked turned us down…hmph).

(The last student interviewed gave such a perfect soundbite, it was like a hallelujah chorus started playing when he spoke.)

It was a great little trip around campus—which, as I’ve noted in nearly every blog post, is really so pretty—and I learned a lot talking to Frank.

Back in the newsroom, it was time for my piece to be edited in preparation for publication. Certainly a valuable experience in journalistic form and proper style, but I don’t think I have it in me to be a real-deal journalist, seeing as every time a sentence I liked was cut, I gave a little internal scream of “nooooooo!”

It’s been a learning experience all around. We’re back at it again today to pull it all together before the site goes live tomorrow, and then it’s off to Stony Brook’s film festival.

Last night, Professor Wasim and I had a heart to heart. We shared our opinions on journalism and he told me all about his job. We came to an understanding of how we both have different opinions on the field and we respect each other’s differing ones. I am not going to completely rule out journalism as a profession, but I do want to explore other options.

On the way back from working in the newsroom last night, Hanna Da’Mes, Sharon Ahmed, Dan Walocha, Kelly Colligan, Reid Rubio, Kayla Aponte and I played tag as we walked to the dorms. It was a lot of fun, but I thought one of us would trip in the dark—good thing that didn’t happen! 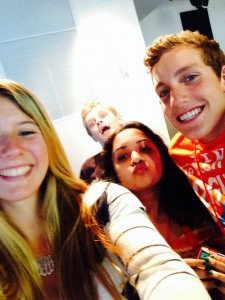 The CAs were really laid back last night because they let us all hang out in the lounge an hour past our curfew. We hung out with the math kids in the lounge and they were so much fun! They left today, so we are all really going to miss them tonight.

This morning we worked on our video footage and by early afternoon my team and I were all done. I really like how it came out and the four of us worked very well together.

Lunch today was a nice change because we had pizza in a conference room. I was running out of ideas for wrap creations in the cafeteria so that took the pressure off. At lunch it hit us how we are all going to miss each other.  The Greene Team got so close in such a short period of time. I know that we will all stay in touch even when the program ends.

I am looking forward to seeing the movie tonight at the Film Festival. I think it will be a wonderful way to end the camp with all of us hanging out together.

I hope that the friendships I made this week last for a long time. I met some really amazing people and I will miss each and every one of them.