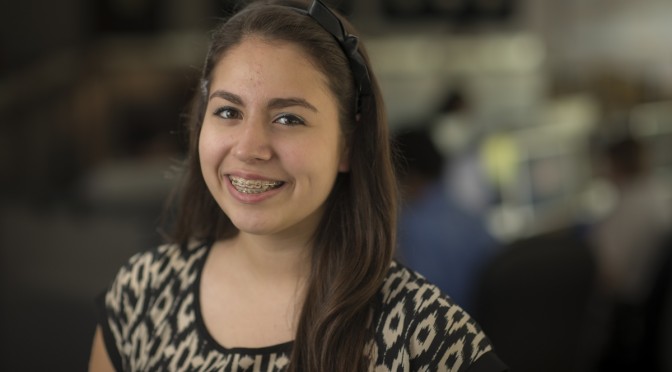 Noelia Vazquez does it all. Aside from singing, dancing, acting, teaching and traveling, Noelia possesses a driving passion for journalism. Noelia is proud to be a part of her school newspaper, East Islip High School’s The Broadcaster. When some students from the paper spoke with her English class about joining, she ran down to her guidance counselor to sign up.

“When I see someone passionate about something, it makes me want to try that exact thing,” Noelia explained.

Everything about Noelia is social: “I genuinely just love talking to people,” she said. “I think that’s one of the things that attracted me to journalism in the first place. I wanted to interview people find out their story and share it. Just interacting with new people to me is exciting.”

Noelia recalled creating her first article, remembering how she had to interview more than 15 students and teachers on their experiences in musical conferences. After finishing that article, Noelia decided that her one of her favorite parts of journalism was interviewing people.

Later on in her journalism career, she ran into a practice that almost all journalists loathe—censorship. Noelia wanted to write an article on a controversial topic, East Islip’s school mascot, the “Redmen.”

Noelia’s idea was shut down because her journalism class, including her teacher, believed it might offend the school board and didn’t want to bring unnecessary attention to the topic.

“We are still young and limited to what we can write about,” she said. “That’s probably the most difficult part of journalism.”

Singing and dancing is also a passion for Noelia—she’s even tried out for the TV talent completion “X-Factor.” She participates in the school musical every year, and has a big appreciation for music. But performing is not the only tool in her toolbox. Noelia speaks fluent Spanish and quite a bit of Chinese. Reading is a large hobby or hers as well.

“When I go to the library I take out nine books,” Noelia said. “But I have a life, I swear!”

In addition to attending this program, she plans to stay busy. She has four jobs:  answering phones at a Chinese restaurant, working at an Italian ice place, babysitting and teaching religion. Following in her sister’s footsteps, Noelia plans to dedicate a couple years of her life to just traveling.

Noelia said she hopes these experiences expand her horizons so that her writing can make an impact, saying “I want to write pieces that make people feel.”

She recalled being approached by an underclassman whom she did not know about one of her opinion pieces on society’s rigid expectations of women. The student said she was pleasantly surprised that the newspaper was writing about issues that teenagers could relate to.

“It makes me feel good when people are positively affected after reading my articles,” Noelia said. “That’s what keeps me coming back to the idea of becoming a journalist in the future.”