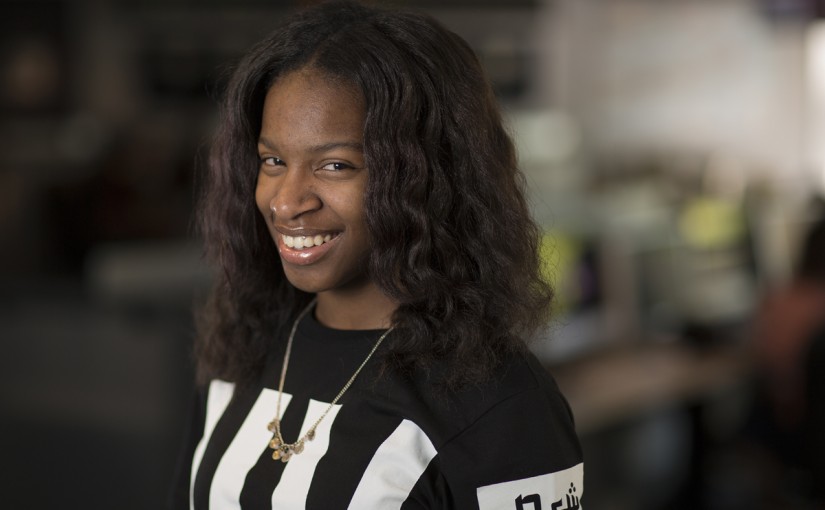 “I would make up stories when I was younger and then I’d start writing them down,” she said.

Using the knowledge learned from school, her stories grew and developed. Amoy’s creative side also transfers onto the stage, “My focus is on performing and singing,” she said, adding that English is her favorite subject.

Brown said that since her grandmother was a teacher, she quickly learned how to read. “I started learning how to read at about age three and my reading level was always much higher than everyone else’s.”

Two of her favorite books are Night by Elie Wiesel and The Fault in Our Stars by John Green, but she says “I’ve never read a Harry Potter book!”

Although Amoy was on her school’s newspaper in ninth grade, Hempstead High School closed the paper when she started 10th grade. With little experience in this field of work, she said she is hoping that the Greene program will guide her and allow her to see what journalism is really like. She found out about this program from a guidance counselor.

“I asked for a stapler and then saw the form on the wall and asked what the program was about,” Amoy said.
“My one goal in life would be to become a best-selling author,” she says.

Her friend, China Phillips, had praise for Amoy’s way with words. “Her writing always comes from the heart,” China said.

Amoy said one challenge that she faces a lot is where she comes from. Many outsiders who have not experienced the life of a Hempstead student are quick to judge and are not welcoming when they find out that she attends Hempstead High School, she said. All this makes her want to push herself more. “You have to give 110 percent all the time,” said Amoy, adding that she gets frustrated when people who do not live in her town, or go through the same things as she does, judge her hometown.

“No matter what others think, you must prove them wrong and show them that we will not be stereotyped,” Amoy said.

In April, Amoy won first place in the NAACP ACT-SO competition. Amoy’s winning piece was a poem about living in Hempstead.

Amoy not only allows time for cheerleading, drama and being senior class president, but also for her community. In her free time, Amoy volunteers at a local soup kitchen. “It’s not about where you come from, it’s about where you’re going.”