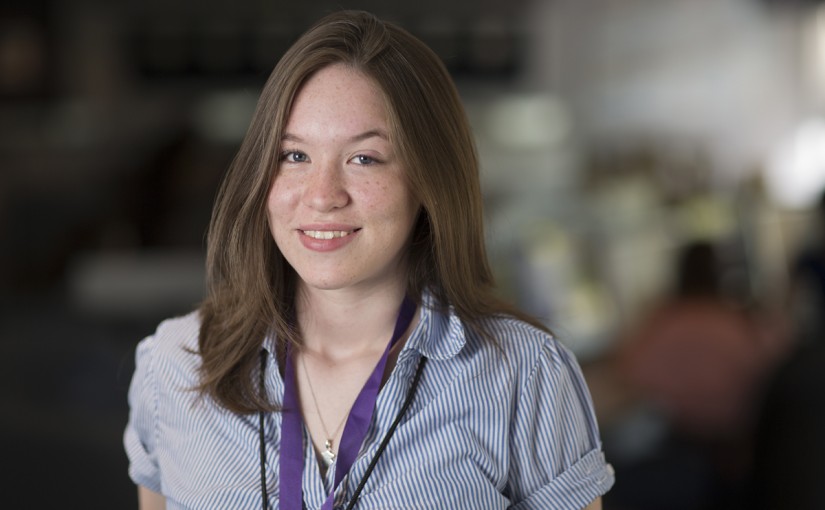 After attending a high school journalism conference and listening to keynote speaker Tanzina Vega share her experience as a journalist for The New York Times, Eleanor Pena-Humes, known as Ellie, instantly knew that journalism was her calling.

“I honestly feel my biggest supporters have been my teachers,” Ellie said. “Especially my eighth grade teacher Ms. Chung, and my advanced art teacher Ms. Visozo.”

Even though she says that she was known in the art department to “lack the Picasso hand,” Ellie could tell the story behind any painting better than anyone in the class could with a brush or a charcoal.

“Ms. Visozo said that I had a true talent, and that I should never give up,” Ellie said. “She said I could move mountains with my words. That kind of encouragement I could never brush off.”

Ellie keeps herself busy working with more than 60 children at a day camp, creating clubs at school and working as the editor-in-chief of her newspaper at Bayside High School.

“I think that leadership is extremely useful. We need leaders who really care about others, not about themselves. A leader has to guide people in the right path, and unlock their potential,” Ellie said. “And that is what I want to do.”

After losing her entire house to a fire in August of 2011, in Flushing, Queens, Ellie felt as if she had nothing left. After the fire, Ellie and her family stayed in hotel for three months until moving to a different house in Flushing. Ellie said she felt discouraged in everything she did, but she continued to write, learn and change.

“I overcame by working through my cloudy days,” Ellie said. “I never stopped and I never will.”

Again, she credits her teachers with helping her pull through.

“I stopped writing and being the outgoing leader that I am, and always have been,” Ellie said. “But my teacher Ms. Chung made me wake up and work harder so my work was worth feeling proud of.”

Since then, she’s written articles for Penny and Mary Inc., a wedding company, had her work submitted to many contests by her peers and had her photos hang in the Queens Theatre in Flushing Meadows – Corona Park.

When Ellie was accepted to the Greene program, she said she was beyond excited to broaden her writing skills and expose herself to new people and new techniques.

“I nearly cried,” Ellie said. “I was so honored to have been accepted among the many qualified applicants, and especially honored to be one of the first city kids. I was just amazed and proud that my work got me this amazing opportunity that I hope will open the gates to my journey as a journalist.”

Ellie said she hopes the skills she gains from the Robert W. Greene institute inform her role as editor next year.

“I hope to learn, improve, and return to my staff with an abundant amount of information to help our newspaper thrive.”