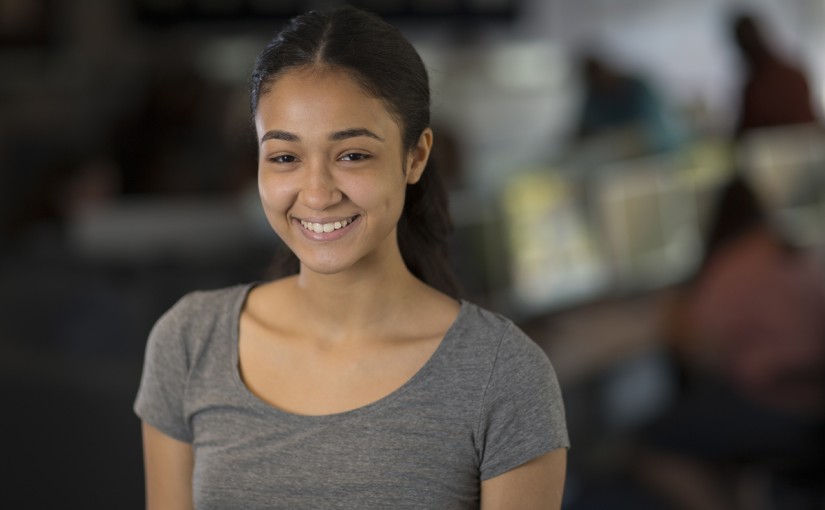 Even as a young child, Gusmery Ramirez dreamed of one day becoming a TV anchor.

“Watching the news on the mornings before school was how I first unknowingly developed an interest in journalism,” she said. Gusmery is a 17-year-old senior at Midwood High school.

Growing up in Brooklyn with a limited number of television channels, she quickly found the news stations to be her favorite, FOX 5 in particular. Greg Kelly and Rosanna Scotto served as her role models. She saw these stations and journalists as sources of information, inspiring her to want to be a part of the action.

Gusmery developed her love for writing in elementary school, when she began writing in her personal journal. Later on in middle school, she joined her school paper. “I loved every second of it,” Gusmery said. She not only began to interview her peers, but also came to discover ways to better present her information. She further developed her work to be more favorable to anyone who read it.

In high school, Gusmery began to fully understand her passion for journalism and present her best writing work. English turned out to be her favorite class. Gusmery took an AP English and Composition Class, where her work became more organized, straight to the point, and understandable all while she kept her own style.

Due to scheduling conflicts, Gusmery was unable to work for her high school newspaper but said she believes her writing classes helped her develop her skills in interviewing and researching, skills essential to journalism. “I developed my love for writing and realized that what I liked doing was known as journalism.”
Gusmery’s AP English teacher, James Felder, praised Gusmery’s schoolwork.

“Gusmery consistently surprises me with her pieces. I can picture myself enjoying an article, looking to see who wrote it and realizing it’s her,” Felder said.
Gusmery’s friends also see her as a great writer. “Gusmery is known as the writer of our group,” said her friend, Kyra Haly. “If anybody needs proofreading or advice with something as simple as an e-mail, she’s the one to ask.”

Gusmery says she is intent on studying journalism in college, and is deciding between digital journalism and broadcasting. With these jobs in mind, she is undecided on which college she wants to attend.

Eager to find a summer task related to journalism, she was happy to find out about the Stony Brook College’s Robert W. Greene Summer Institute for High School Journalists. Although daunted with only having one day to complete the requirements, she succeeded in getting in.

When she found out she was accepted into the Robert W. Greene program, Gusmery said she was “super excited.”

“This is my first step in pursuing journalism and getting to know what exactly it entails,” she said. “From this opportunity, I know I’ll leave knowing more about the field than I ever have.”