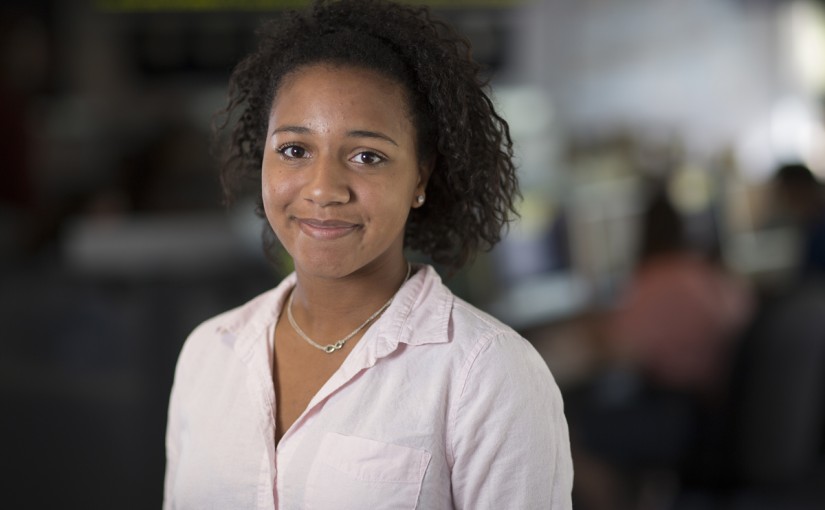 As Kayla Wallace approaches her senior year at Baldwin Sr. High School, writing is, more than ever, opening her eyes to future careers and experiences.

“I used to have a love-hate relationship with writing,” Wallace said. “I would hate writing assignments given to me at school because I would hate the subject. But as I’ve grown older, I’ve been granted more freedom with what I write about and how I write it. I’ve been able to develop a writing style unique to me.”

“She is a child at heart, but she always pushes me to do things I never thought I could do,” Kayla said.

Kayla’s parents have noticed her knee-deep investigation and excitement for worldwide news stories and are thrilled that Wallace has found her calling.

“Kayla has always been interested in current events, especially global ones,” said Kayla’s father, Kevin Wallace Sr. “She’s always been super aware of what’s going on, so when she told us she wanted to be a journalist, we felt that it was perfect for her.”

A few years ago, Kayla and her family were given the opportunity to be interviewed by CNNs’ Kelly Wallace (no relation), for a story about healthy family living.

After experiencing a film crew take over her house for the story, Kayla became intrigued with the notion of broadcast journalism. “It was great to see everything that goes into a story,” Kayla said. “I was really interested in how it turned out afterwards. How that could be a job. How I could do that.”

During Wallace’s free time, she finds herself reading articles from daily newspapers and watching shows such as VICE News.

Although Wallace described her pursuit of a journalism career to be rather recent, when she was informed of this summer program, Wallace said she could never say no.

“When the opportunity to apply was given by my English teacher I took it right away,” Kayla said. “When I got accepted I was immediately excited to go and learn skills that are imperative to broadcast and written journalism.”

Her father cites her natural curiosity as an asset in her pursuit of journalism.

For Kayla, studying journalism at the Greene program is a way to explore her interests while having fun.

“I’ve always enjoyed writing all types of literature and as I’ve grown older I’ve developed a greater interest in current events, politics and things like that,” Kayla said. “Journalism has become a way to tie all of these things together, and it’s exciting because I can incorporate these things I enjoy into a career.”