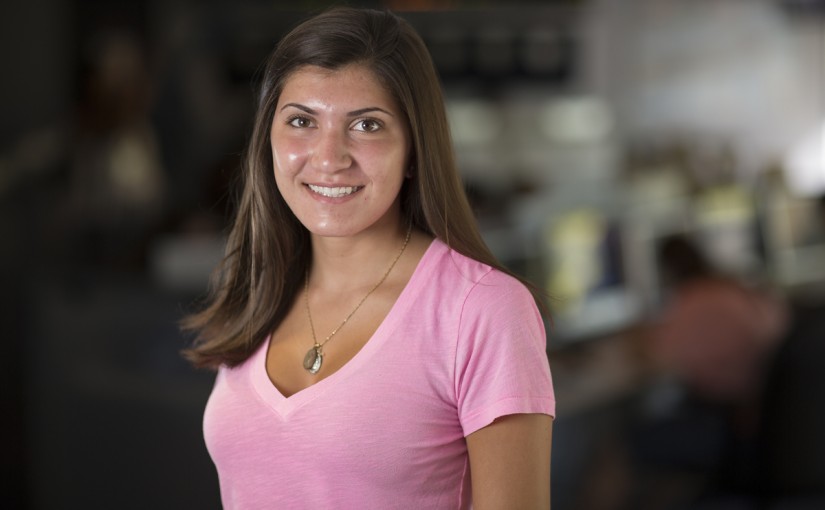 Journalism comes easy to Marchella Verdi, a rising senior at Shoreham Wading River High School. Years of experience and many awards make the 17-year-old writer incredibly prepared to become a member of the 2015 Greene Gazette.

“I wish to see the world through someone else’s eyes, so I could understand how he or she thinks and truly feels,” Marchella said.

People and their interactions often inspire her, she said. Verdi found herself writing editorials throughout her second year on The Wildcat Pause. She gained confidence in writing as he wrote the section deemed “The voice of the whole newspaper,” by Jean Branna, her journalism and English teacher.

This interest in human behavior stemmed from reading Lord of the Flies by British author William Golding. She read it for an English assignment during her sophomore year, and it impacted her greatly, giving her a different perspective. “The setting warps the minds of the children,” Marchella said, “This book sparked my interest in writing about human behavior.”

Through writing for her school’s newspaper, The Wildcat Pause, she has found a voice that has resonated with her community. She’s been awarded by Hofstra University for photographs, drawings, headlines, articles, layout and creativity in her school paper. Marchella also had an article featured in her local newspaper The Riverhead News in February.

Her articles for the school paper cover a wide range of topics, including body image, sports and education. Marchella has written pieces for twenty-two issues of the paper and has held the position of arts and entertainment editor; she will be taking up the position of editor-in- chief during her senior year. Marchella also has her artwork displayed by the Long Island Museum in an exhibit titled Colors of Long Island.

While her focus has been in print journalism, Marchella is also interested in broadcast journalism.

Verdi has had experience in front of a camera as a model and in commercials. Because of this experience, she is excited to learn about all of the aspects of news reporting at the Robert W. Greene Summer Institute for High School Journalists. “Watching news channels and listening to how broadcasters present news stories inspires me to want to be in their shoes one day,” she said.

“I want to know and learn everything; from the routine of receiving stories to the emotions the broadcaster feels when he or she gets to report stories to parts of the world,” Marchella said. Journalism is where my heart is.”