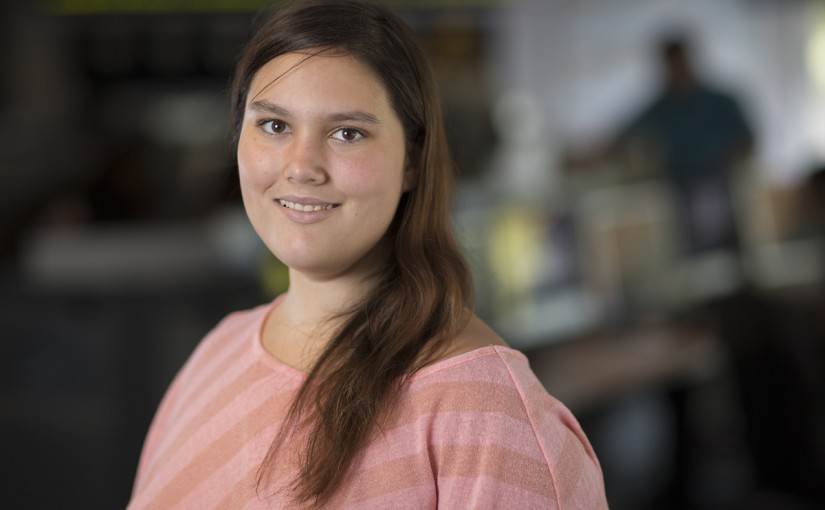 “I like to tell stories, when I write my goal is to make the reader feel something or even help them to change their perspective,” she said as she prepared to enter the Robert W. Greene Summer Institute for High School Journalists.

An amateur poet and an aspiring novelist, Margaret said that, from a young age, she would sit on her mother’s lap and tell her stories aloud while her mom wrote them down. Margaret knew then that writing would be her outlet.

“Poetry is definitely my favorite thing to write, because I can write from the heart,” she said, adding that one of her greatest inspirations is poet Emily Dickinson.
Margaret has written many poems and she is now finishing her fourth novel, hoping one day to get her work published.

She’s been a dedicated writer for some time. In the fifth grade, she started the first newspaper at her elementary school Albany Avenue called the Albany AveNews.

“There was no place for the students to share views, so I recruited students who also were interested in journalism and wanted a way to express themselves through writing,” Margaret said.

She has been writing for her high school’s newspaper, the Trinity Triangle, for three years. She serves as sports editor, news editor and photographer. She recalls first being recognized for her talent to the moment in fifth grade when she won a community writing contest. As a winner, she was interviewed by News12.

“I felt very special because I had always watched News12 and I was honored to be interviewed by Ken Grimball.

One compliment she will always remember came from the Newspaper Moderator at her high school, Sara Candela- Brieg who said that Margaret was “magical with words.”

But she has other talents and interests besides her love for writing. She has been pursuing dance since she was 2 years old and she has been a Girl Scout since kindergarten. As a Girl Scout, she has earned countless community service hours through troop leading and helping support the fight against cancer through the Sarah Grace foundation.

A rising senior, she is a Eucharistic minister and a religion teacher at her local church, Our Lady of Lourdes.

Margaret maintains a high academic profile, being inducted into the National Honor Society, and the Quill and Scroll Honor Society. She hopes to attend Vanderbilt University in Tennessee and major in speech pathology.

Her mother, Agnes, studied journalism in college, and she says that her dad, Alfred always encourages her to write, often telling her to make a career out of it.

It was Margaret’s English teacher, Leanne Callabrese, who pushed her to apply to the Robert W. Greene Summer Institute for High School Journalists.

Her friends notice her talent, too.

“With tangible passion and a powerful message, young writer, Margaret Hans, encrypts a secret cod-of-sorts that vibrates emotionally toward any reader who feels that their story is too complex for the common eye, and wishes to be comprehended in a blanket of understanding,” said her friend, Nicholas Ferrari, a graduate of Holy Trinity Diocesan High School.

“I would like to gain more skills in journalism and in writing and make this summer full of new memories,” she said.