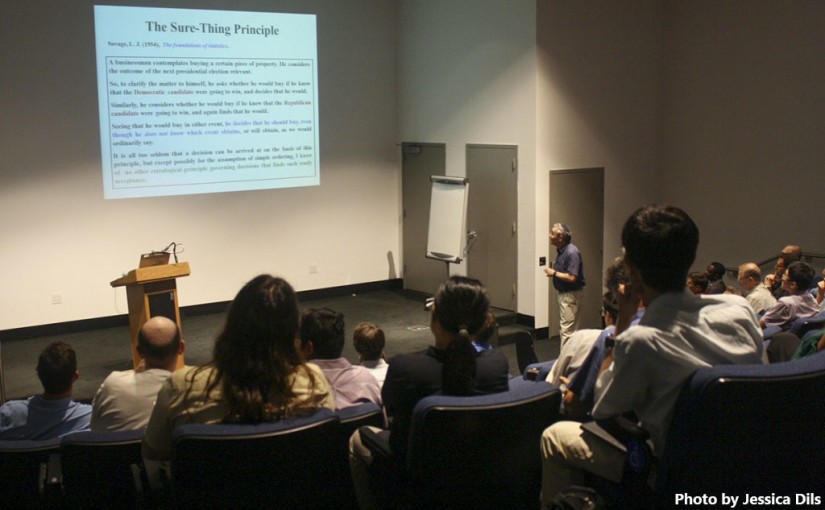 Intellectuals from all branches of academia and parts of the world gathered in Stony Brook University’s Charles B. Wang Center this week to celebrate — and become inspired by — the work of modern mathematician John Nash in the 26th International Conference on Game Theory.

Nash, the subject of the biopic, A Beautiful Mind, and a pioneer in the field of Game Theory, died earlier this year in a car accident. He was a regular attendee at the conference, which features the work of economists, political scientists and mathematicians who apply game theory to problems.

Nash’s admirers said his body of work remains to be expanded upon and improved.

Mathematicians apply game theory during strategic moments when the best possible outcome for a player is directly affected by the strategies of others in that scenario.

One of Nash’s contributions was to identify an “equilibrium,” a state of stalemate when all players in a game of two people or more are unwilling to change their strategy regardless of the strategies of other participants.

Conference attendees said the Nash equilibrium and game theory in general will likely serve greater purpose in the future.

Several attendees had been to the conference more than once. While Game Theory is most prominent in economics the conference speakers extended its usage to areas such as auctions and even software engineering.

Northwestern University professor Jason Hartline expressed great expectation for Game Theory in computer science. “It will be used to build better computer softwares,” Hartline said after lecturing on the use of game theory in auctions and more.

Much like Professor Hartline, UB’s Kazumori recognizes the potential for greater knowledge of humanity through the theory Nash created.

While some members of the conference believed Game Theory would be applied to real life situations, others believed the theory itself would not see much change, but agreed that it would expand into different applications beyond games and economics.

That idea seems rooted to Game Theory’s birth in the 1940s and 1950s on a foundational hope that it would aid in the growth of society .

Perhaps Professor Eii explained Nash’s brilliance best, “His brain is very different. It is special, like the body of a professional athlete compared to an average human being,” he said. “John Nash was a genius.”

As for Nash’s theory, Oxford University Professor Dominik Karos agreed to its potential and assured us of its future in the world. “It will evolve.”