For Division I athletes at Stony Brook University, the wait for a top-tier workout facility is over. 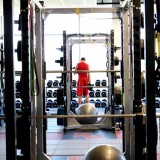 Dubin is the co-Founder and Chief Executive Officer of Highbridge Capital Management. “He’s done very well for himself,” Kolb said, “and he’s been gracious enough to come back and see all the great things we’ve been doing over the past few years, and donate $4.3 million of his own money to fund the Dubin Center.”

Leonardo Fernandes, a midfielder for the men’s soccer team,  said he loves the Dubin Center. According to Fernandes,  it differs from the old facility in that it’s bigger and has more machines. “It’s an amazing weight room,” Fernandes said.

The Dubin Center has a red, black, white and gray color scheme. Curved metal panels run across the ceiling. There are many pieces of equipment specialized for the needs of the student athletes. Ceiling-to-floor windows make up the back wall, and look out over the construction site that will become the new rec center, which will be focused more on the general student population rather than on athletes.

The new center is not available for use by non-athletes. Nicholas Kolb, the Assistant Director of Speed, Strength and Conditioning, said that it’s important that athletes have their own place. The Dubin Center is designed specifically for student athletes to train, where the rec center will have more general equipment.

“There’ll probably be more cardio, the dumbbells won’t be as heavy, and they won’t have the Olympic platforms we have here,” Kolb said.

Dani Klupenger, a member of the women’s basketball team, also enjoys the new facility. “I think it’s perfect,” she said. “And honestly, I haven’t used the new TVs yet, where they can record you and watch how you lift and make sure you have the correct techniques, so that’s probably what I’m most excited about using in the future.” 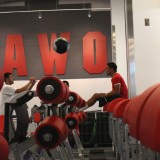 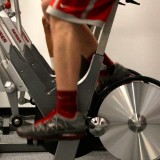 A student athlete exercises on the new stationary bikes at Stony Brook University’s Dubin Center on Wednesday, July 25, 2012. The new bikes have been described as more challenging but quieter than the older models. Photo by Alexandra Henaghan 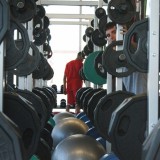 Students use the new Dubin Center facilities to work out. Photo by Alexandra Henaghan on Wednesday, July 25, 2012 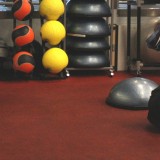 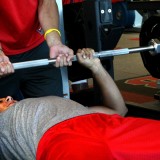 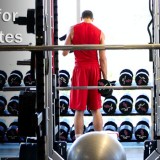