Health of training program in peril

Mr. John was dying. His blood pressure was on the rise, he was sweating and vomiting. Then suddenly the monitor flat-lined and it was a race against time. A team in white coats began performing CPR and tried to bring him back to life with a defibrillator. With one last shock they waited. The beeping started up again. They saved Mr. John’s life. And with that, they celebrated. 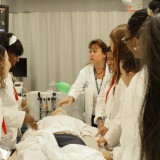 The team was made up of students in Stony Brook University’s Health Careers Opportunity Program, or HCOP, a six-week summer program for high school students who learn the fields from the university’s health sciences faculty. The students worked together to save the life of Mr. John, a dummy with simulated health problems.

But without a real shock to the heart of the finances that fund HCOP, the program that serves four high-needs Long Island school districts through a three-year, $1.3 million federal grant, will cease to exist.

“It is a successful program that needs to be sustained,” said Program Director Dr. Carlos Vidal.  ”I believe very strongly and the people involved in this program feel the same way.”

The elimination of funding stems from a U.S. Senate Appropriations Committee decision stating that the wait lists for training programs for allied health professions are full. HCOP organizers say they don’t challenge that rationale, but that “students currently enrolled in allied health professional programs . . . do not reflect the demographics of  the diverse students served by HCOP from the high-needs communities of Amityville, Brentwood, William Floyd and Wyandanch.”

The atmosphere in HCOP classes, while rigorous, is easy-going and filled with laughter. The students support one another by clapping and cheering when someone does a good job.

“We have become more productive for having been in this program,” said student Daniel Perez. “I, myself, have done better since starting here.”

The effectiveness of the program is borne out in statistics. “In 2010, 91 percent [of students] were reported as enrolled in college,” Vidal said, adding that those figures are much higher than the rate at which students from the four school districts attend college. “We’re the only program like this in New York State that really introduces students to the allied health professionals.”

Vidal and his team have lobbied legislators with letters of support and signed petitions for the continuation of funding. “Whether I’m here or not doesn’t really matter,” Vidal said. “What matters is that the program is here and that someone is still invested.” 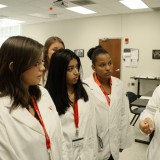 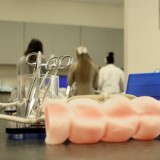 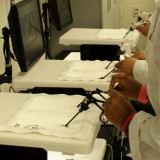 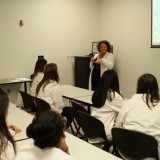 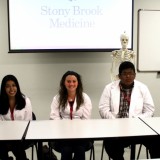 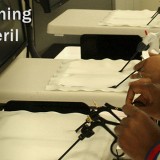