Inspired by such books as “To Kill a Mockingbird,” Katherine Zito has long had  a passion for social justice. Now she is acting on that passion. 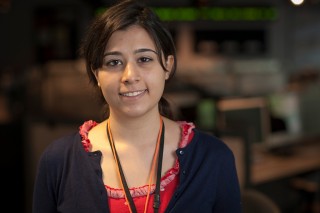 As a senior at Baldwin High School, she joined the school’s newspaper “The Golden Wave.”The first article Katie wrote was a commentary on free speech.

“While free speech is important, many people use free speech to say things that are offensive and hurtful,” she wrote. “And while yes, that is their legal right, other people have the right to use their free speech to tell them that what they said was offensive.”

This was to be the first of many articles in which Katherine explored issues of social justice.

In addition to commentary, Katie enjoys writing  humorous stories, satire, and other forms of creative writing.

Her writing really blossomed in 9th grade under the guiding hand of her English teacher. Another strong influence was a 10th grade English teacher, who was head of the school’s literary magazine, the Phoenix.

Although the Phoenix was short on members at first, Katie helped recruit others. She now serves as the magazine’s graphic designer while continuing to submit her poems and stories.

Katie actively contributes to her community. She is a member of her school’s environmental club and had written an article for “The Golden Wave” about environmental conditions at her school. She is also a member of Girl Scout troop 2299. She and the other four members of this group (who are like family to her) do various services to help the community.

Katie’s hobbies include using the computer, reading, and watching TV. She likes reading fantasy books as well as other novels including John Green’s “An Abundance of Katherines.” She also enjoys watching “Glee” and “Community,” among other shows, which she studies to improve her own writing.

Katie plans on studying English and sociology in college in order to become either an English teacher or a professional writer. She would want to write books for both children and adults as allegories for world issues.

“I like writing because it’s a way for me to express myself creatively,” says Katie. “I may not have the loudest voice or the most intimidating presence, and it’s hard for me to make myself heard sometimes. But the written word gives me a voice, even when my real voice shakes.”