Matthew Kolbert dreams of becoming the editor-in-chief of The New York Times. But first he’ll have to persuade his parents that journalism is a worthy career. 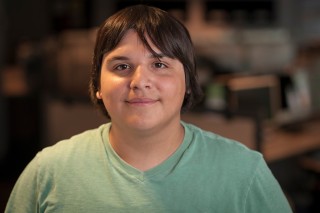 After Matt expressed an interest in journalism, his father was a little skeptical. It was not that he disapproved of Matt’s choice. He was merely concerned about his future. Matt chose journalism during a time when the career’s direction was up in the air. As the shift is quickly being made between print and the internet, no one is sure what lays in store for journalists, least of all Matt’s dad. Without making specific suggestions, he wished only that Matt had secure future.

This is slightly ironic, considering Matt partly owes his interest in journalism to his father. As a child, his dad always kept Matt informed about the news. This created his thirst for knowledge and the more Matt grew, the more the thirst grew as well.

As a freshman, he took his first journalism class to help quench that thirst. Unfortunately, due to scheduling issues, he had to drop the course after two weeks. But this short time was all he needed. During this time, he was exposed to new ideas and ways of approaching the news. He was inspired. “I was like ‘Wow! This is reallycool!’,” Matt said, “‘I wanna do it.’”

As a junior, Matt became more involved in his school paper, the Cover Times. Since the staff was small, he wrote whatever he needed to, but has found that editorials are his favorite to write because he loved to voice his opinion.

Matt has since taken on a leadership role in his paper. He has big plans to help improve the regrettably small Cover Times and bring more student attention to it. After visiting several workshops while at the Quill Awards for his school, Matt got some new ideas. One of these is to get the Cover Times online and allow students to write comments about the articles. Another is to have more articles written about world news, not just school news. “I’d like to talk about broader things to give insight to kids who don’t usually read the news.”

This is the first step on a long journey for Matt, who aspires to one day be the editor-in-chief of the New York Times. He is drawn to The Times for its reputation as among the best news outlets. Matt has also found that he likes to supervise the work of others. “You know, just being up there, in the big corner office, get to see everything, get to be in charge of everyone,” he says. Plus, no job would better demonstrate Matt’s success to his parents.

Besides journalism, Matt is interested in a career in environment engineering or planning. He has even considered combing the two interests, writing about the environment as a journalist. Matt believes that as a journalist, any interests you have can be used to write a compelling story.

In addition to working on his school paper, Matt is the vice president of DECA, a business and marketing club. He recently attended the New York DECA State Career Conference and Competition in Rochester, where he won a Finalist Medal for Advertising Campaign.

Matt also enjoys singing and is tenor one section leader of his school’s select chorale.

Matt applied for the Greene Institute upon the suggestion of his journalism advisor at Glen Cove High School. He hopes to gain guidance, especially when it comes to news writing, since he has mostly focused on editorials so far. He is also looking forward to being exposed to real journalism. “That could be my future,” he says, “and I’ll have a week to experience it.”