Natalia Barr: ‘Doing what I want to do in life’

And like mutating genes, her writing has gone through a bunch of changes. While it took Natalia until middle school to find her own voice, since then it has allowed her to express her personality and style. 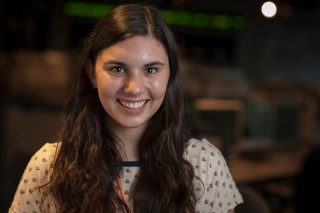 In middle school, she found inspiration from her English teacher, Mr. Byrne. She worked on a children’s story about a giraffe that desired to be taller and through his self-belief, he fulfilled his dream.

Mr. Byrne encouraged Natalia to write with the same wit and enthusiasm. However Natalia struggled to fit in.

“I did not know whether I should act like the person I know I am or sacrifice that for friends.” Natalia said.

It was in middle school that Natalia’s interest in professional writing began.

“I did not know until middle school that people who wrote for the magazines I read had actual jobs. It seemed like a career option I could explore,” she said.

She broadened her horizons by vacationing in London, where she realized there are people around the world with different ideas and beliefs. From then on, Natalia said she would stop “trying to be like others” and break away from the bondage of conformity. Natalia expressed herself as an individual who wants to spread her ideas around the world.

With this newfound self-discovery, Natalia chose journalism and fashion as outlets for individuality. Her trendy fashion sense and disapproval of sweats in school are just the start; Natalia wants to visit the fashion capitals of the world to write reviews and interview designers.

“I would love to write about fashion as a journalist, tying all [my interests] together!” Natalia said, adding that it would be “exciting to start a blog” on this topic.

Natalia is a member of her school’s newspaper club, the Golden Wave. She has also taken a journalism class taught by her newspaper club advisor, Miss Hughes.

“You should try it,” Natalia remembered Miss Hughes saying as she informed the class of the program.

Natalia will start her junior year at Baldwin as the Golden Wave’s Secretary. She hopes to gain knowledge of photojournalism and further develop her writing skills as a part of the Greene Team.

“I am looking forward to strengthening my writing and learning about video journalism during the week,” she said.

Natalia continues to express herself through her writing and hopes to be the editor of the Golden Wave as a senior to fulfill her journalistic dreams.

“I was once an outsider,” she said. “But now I feel that I am doing what I want to do in life.”