Rebecca Lewis: Call her a ‘realist’

Instead of reading Cosmo like many teenage girls, Rebecca Lewis prefers to stick her nose into a dusty comic book. Preferably one about her hero, Batman. 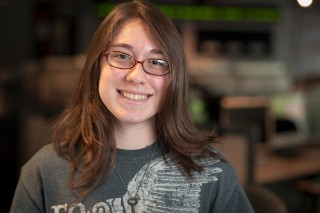 Like her hero, Rebecca is a rising senior at New Hyde Park Memorial High School who is always questioning the world. Although her skepticism may make her appear cynical at times, she prefers the term “realist.”

Her interests range greatly. She plays violin in her orchestra and loves to listen to old vinyls. She runs track nearly every season, but also enjoys reading classic novels as well. And, of course, there is Batman, from comic book to movies. That might account for her interest in journalism, too, given Batman’s penchant to see justice done.

It wasn’t until tenth grade, when her mother convinced her to take a journalism class, that Rebecca realized her passion for the subject. She joined her school newspaper, The Chariot, and quickly learned how to write articles like a true journalist. Since then, she has written pieces on Freedom of Speech, Trayvon Martin, and Gary Oldman. Next year she’ll be a leader in her school newspaper as the feature editor. She earned the spot through  the many features she has written over the years.

Like many teenagers, Rebecca is uncertain about her future career path. Rebecca is passionate about journalism, but does not yet know what type of journalism appeals to her most.  As of right now, Rebecca hopes to one day serve as a foreign corespondent in Russia. She explained, “I would get to be in an amazing place doing something that interests me; it’s the best of both worlds.” She hopes to one day attend a school like Fordham, Washington University, Boston College, Stony Brook, or maybe even Princeton, and then pursue her journalism career further after college.

Rebecca learned of the Robert Greene Institute for High School Journalists while on a search for a program to attend this summer. When she found out about the program, it seemed like the perfect match.

She applied and, although she wasn’t sure if she would get in, she knew that she wanted to go. It just “seemed like fun,” said Rebecca.

Rebbecca came home one day to find a message and an email about the program, but was too nervous to open it. Her mother insisted. She was overjoyed to learn that she had been accepted.

Why journalism? “Journalism gives me the chance to let my voice be heard, and it also lets me ensure that others are heard as well,” Rebecca said.